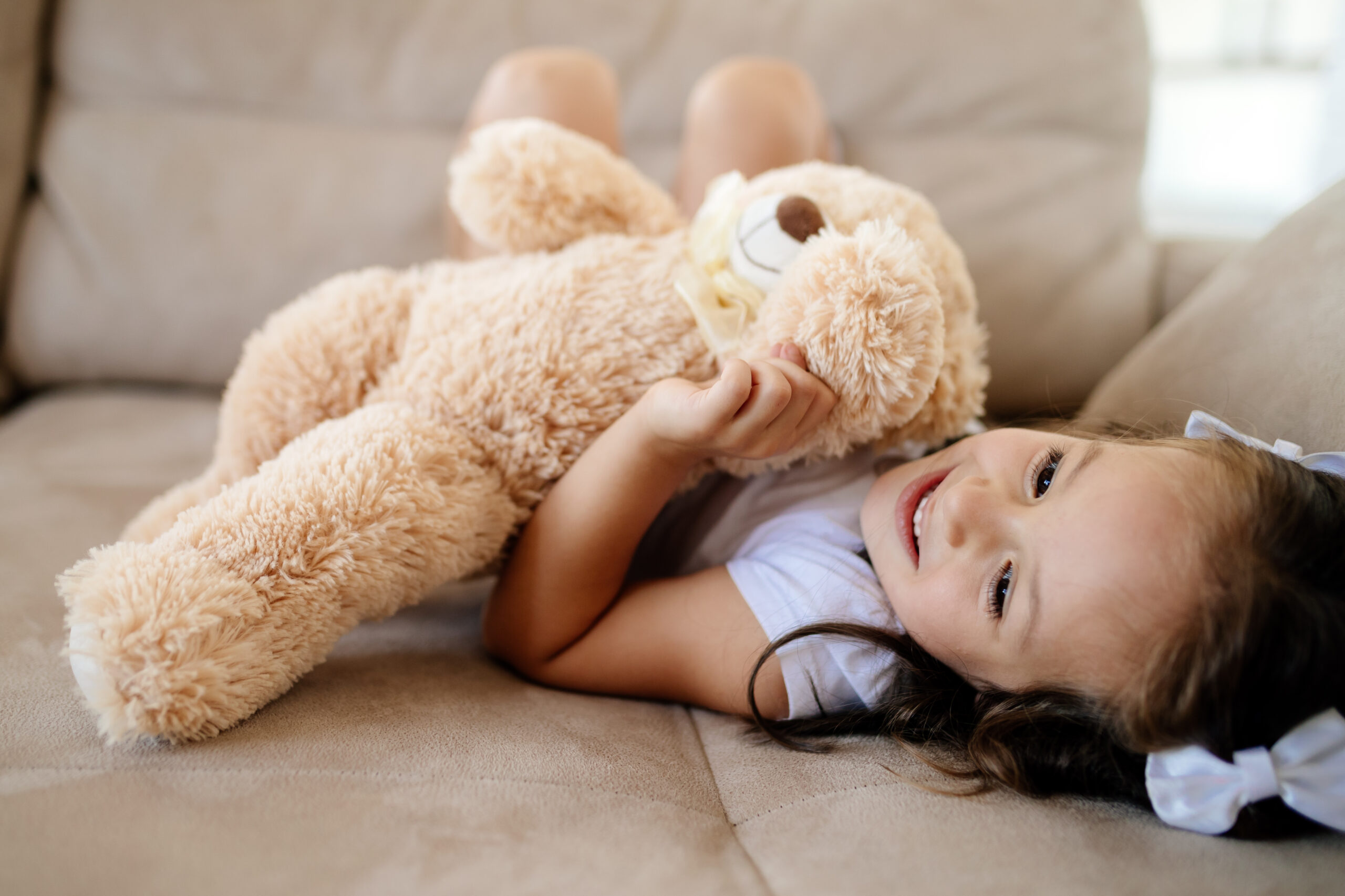 Items such as teddy bears, loveys, special blankets, etc can be very healthy and positive for young

children, particularly to use in early childhood as transitional items to help the child soothe him

or herself during new and unique situations.

Children can be encouraged to have a soothing item, but the genuine attachment to a transitional

object is nearly always created naturally if and when the child is in need.

When the infant/toddler begins the natural, gradual process of separating for slightly longer

segments of time from the primary caregiver, the child begins to develop a sense of self

outside of the parent-child dyad.(Childhood Development)

insignificant, many toddlers experience anxiety and are eased by developing a symbolic

attachment to an object which acts as external representation of the parent.

his or her new independence more comfortably.

It is helpful to be kind and supportive with your child about the item, as it means that they are beginning to learn the art of self-soothing and they are becoming more comfortable with being independent. Depending on the child’s age and the object, it might be appropriate to have the object with them most of the time.(Childhood Development)

However, it is appropriate and healthy to establish realistic limits with the child while

being kind and supportive development.

For example, objects must be washed. Parents can involve the child in the process and provided

activities to help the child self-soothe during that time, using it as a learning opportunity

to instill belief that the child will be alright for the short period of time away from the toy.

discussing fun times they had with the toy or drawing a picture of it.

if the child has the language. It is important to validate the child’s feelings about not having the

object in hand without encouraging the child to act out.

As the child ages, additional boundaries might be important.

For example, the child can be permitted to bring the object on an outing, but they must leave it in the

car or with a parent in a bag when

the child is on the playground or with a peer. Further, allowing the child to make choices about

where to store the item, within limits placed by the parent, can increase the child’s sense of

control in the anxiety-provoking situation. Longer periods of time without the object, which

occur naturally, will increase the child’s confidence that they can self-soothe without it.

When the child enters preschool, the parent might discuss additional boundaries while being

sensitive to the child’s anxiety about entering a new environment. It can be useful to provide the child with information that other children might want to play with the toy. If the child does not want to share the toy,

a parent can recommend keeping it safe in a cubby, backpack, or at home in a special designated sp

ot. Additionally, as the child ages, the parent can provide information about how peers might

perceive the use of such objects. Then, the parent can allow the child to make a choice about how to proceed.

As the child becomes more comfortable with his or her sense of self and more practiced at self-soothing, there will be less of a need for the object. Also, small, realistic limits employed when the child is young can

make the transition away from the object smoother. Aiming to eventually find a safe area to

rather than needing to give or throw away the object.